When I think about the word “satisfaction” or feel into it, words like contentment and fulfillment arise. In my mother tongue (german), the word for satisfaction is “Zufriedenheit“, which loosely translates to “towards peace“. I love that!

What leads me towards peace? For me it implies taking some kind of action that moves me towards fulfillment or peace of mind. As I sit with the question, more and more answers bubble to the surface.

On the last New Moon I set an intention to write each day for at least 12 minutes. This has brought me more satisfaction and joy than I expected. It was the piece missing in my life: a commitment and making room for something I love doing on a daily basis. Of course more often than not, the 12 minutes turn into an hour or more, because time just doesn’t exist when you are happily flowing in the realm of creativity.

Also there is something incredibly satisfying of capturing a perfect moment or the beauty of what I see in a photograph. It can be just watching a sunset or beautiful cloud formation, or discovering the unique patterns of a leaf or the mysterious bug on a flower. Often the satisfaction comes from being present and taking in fully the beauty or essence of what is before me or what I am experiencing, like the wind gently caressing my skin.

And then there is just being in Nature, no doing. There is nothing that brings me more joy and “Zufriedenheit” than that.  In our busy world it is a worthwhile question to ask ourselves: “What moves me towards peace?”  Perhaps as each of us move more in the direction of inner peace, the world on the outside will reflect more peace as well.

In response to the Weekly Photo Challenge: satisfaction 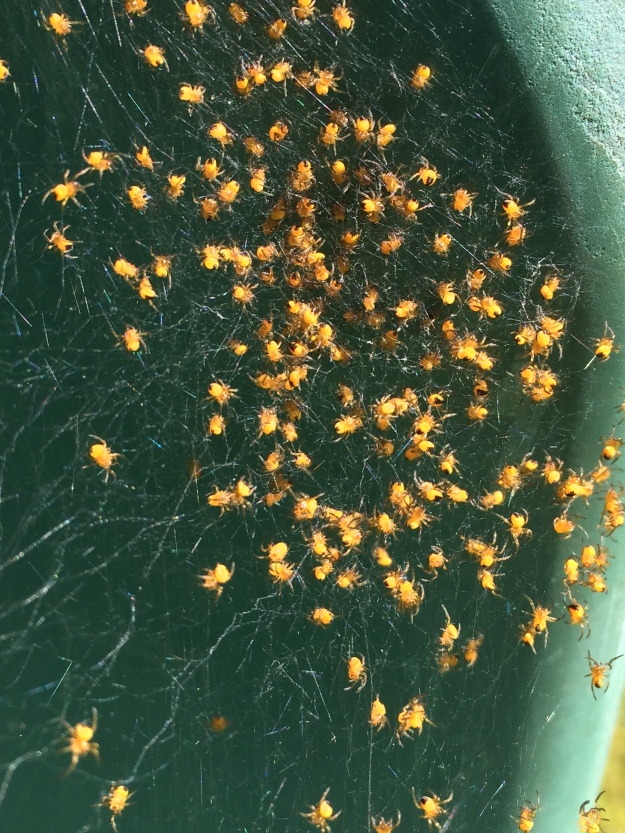 On a warm day in the spring I had been happily writing in the garden when some unusual activity on the other side of the bench I was sitting on caught my eye. Looking closely at the shape-shifting yellow ball, I discovered that it was made out of tiny yellow spider hatchlings (much smaller in actual size than the photo shows), which were just beginning to move out in every direction. Some found their way to my open journal page and one was even brave enough to take a ride on my pen for a little while till I released it in the grass below.

I am glad to say that most of the time spiders don’t evoke the fear that I used to have, thanks to a Tarantula that I met at the Bug Zoo in Victoria, BC, a few years ago. I have forgotten her name, but won’t forget those precious moments when fear turned first to admiration when witnessing her patient tolerance of the high pitched screams when she was placed upon the hands of others who perhaps like me were trying to overcome their fears.

When it was my turn and I held out my hand, admiration turned quickly back to fear but only for a moment. Then surprisingly the fear turned into love. I couldn’t help but be affected by the calmness and presence of this beautiful creature sitting so trustingly on my hand. She was here to help us overcome our fears. The moment I realized this, my heart completely opened.

Every now and then when I get startled again by a big spider and fear arises, I remember her teaching and the love and deep gratitude that I have for her. Now I can freely admire the beauty of their exquisite webs, their incredible weaving skills and the cute baby hatchlings beginning their cycle of life and taking their place in it. Well, and the big ones, if they are in our house, I carry carefully outside in a glass and wish them well.

In response to the Weekly photo challenge: Unusual

Today I am doing something different, which feels really good. Today I am writing in response to a daily writing prompt that I had signed up for ages ago. Even though I faithfully look at each new prompt, I have never been roused into taking action. Today however I felt compelled to write by the one word offered to me.

Paradoxically, it is the word “dormant” which got me going. In the instance I read it, I realized that this is what I have been feeling for quite a while now. There is a part of me that feels like it has been in a state of hibernation. And isn’t it funny that the word “dormant” should be the one that awakens me from that state?

Perhaps the rain has helped, too. I can almost hear the sigh of relief from the plant world around me and a few humans as well. There is something about the freshness and smell of the air in the forest and garden after a rainfall. The garden is delighting us constantly now with it’s display of colours, new blooms

and harvest. Many of these plants started as tiny seeds and are now dazzling us with their beauty or taste.  The rain reminded me that all seeds need water to germinate. This daily prompt “dormant” was the drop of water I needed to break open and feel motivated to write even if just this little post.

Another thing that is different for me today is that I realized while washing dishes and looking at the empty bay before me that I don’t need a lot of time to create as I thought I did. I can take little pockets of time here and there and do what I love. So this excuse is no longer valid. Deciding to let go off this belief is moving a big hurdle out of the way and allows me to do what I love even when life is busy and full with many other things that are all calling for my attention.

I wonder if a seed might feel a sense of excitement and possibility, when it gets planted in the ground or the wind carries it through the air into the unknown. There is something very special about imagining what nourishment or conditions are needed for a dormant seed to awaken and bring forth it’s potential. And what a miracle it is that a tiny seed can grow into giant tree or carrot or flower…. 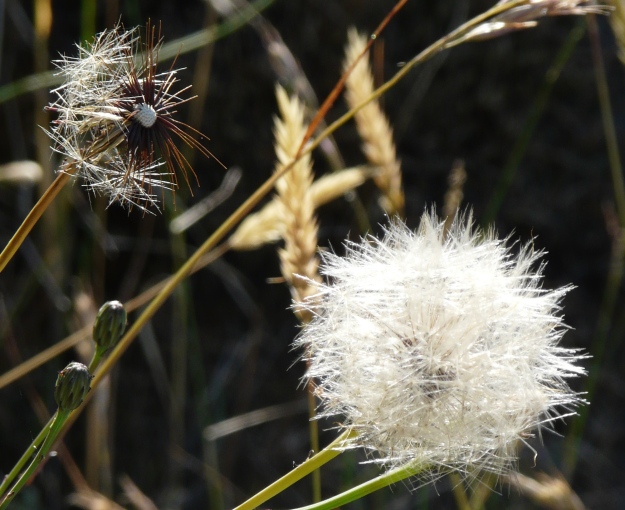 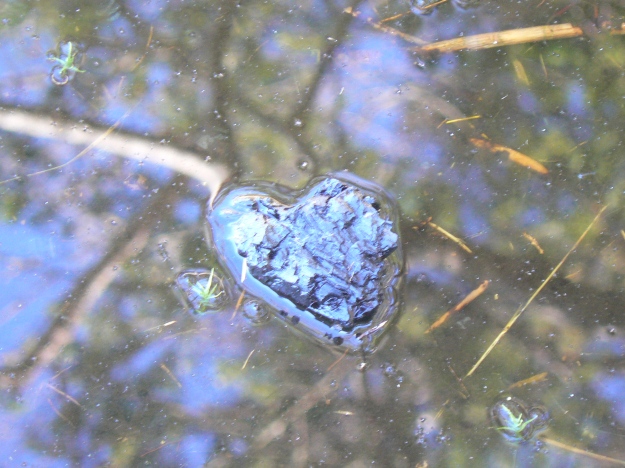 The beautiful reflection of the trees and blue sky in a puddle caught my eye the other day. It is amazing what a simple puddle might reveal…. This was too sweet to pass by. It took a while before I finally succeeded in taking a picture without my own reflection in it. As I circled around the puddle a few times, trying different angles and directions, my own image kept showing up.

It was not until later when I looked at the photographs on the computer that I became aware that the puddle really had insisted on showing me my own reflection. So the next day after a rainy night I decided to go and take another look.

As I walked the familiar path I came across a squirrel sitting at the side of the road. It watched my approach and I had the unexplainable feeling that it had been waiting there for me. I expected it to race up the tree at any moment, letting me know in no uncertain terms

that I was the intruder on this perfect morning with drops of rain glistening everywhere. But it didn’t. It sat there quietly on the ground and I stopped a few feet in front of it. We looked at each other for a while and not until I decided to take out my camera, did it run up into the nearby tree. From it’s new perch it looked at me with it’s kind and steady gaze, making me wonder what he or she was seeing.

As I moved on and rounded the next corner I was surprised seeing a small deer standing at the same side of the road. It looked at me with soft eyes. I couldn’t resist and raised my camera to take some pictures. This time I wasn’t wondering what she was seeing, but instead I was very aware of being seen. Finally I decided to take a step towards her. She  raised one foot, then another, and very slowly moved deeper into the forest to watch me walk by from a distance. 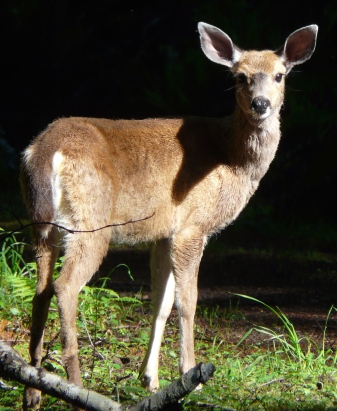 Soon I found myself standing in front of a puddle, then another, gazing at my own image in the different shapes of puddles and backgrounds.

I don’t know why it felt so liberating to look at my own reflection in the puddle mirror. I stood there for a long time, looking with curiosity at the image in the water and taking in what squirrel and deer had seen. It felt strangely comforting, like coming home to myself, embracing and acknowledging my own presence. I was both the observer and the observed.

I also had fun taking pictures of myself in the puddle. Instead of avoiding my own image, it now became my focal point. All the seriousness I had been feeling left in that moment as I smiled at myself in the puddle mirror. I could almost see the little five year old girl who used to love racing barefoot through the summer puddles, not caring if she got dirty or wet.

The smile turned into a grin when I said out loud: “Mirror, mirror on the path, who is the fairest one of all?” Could I dare see and claim my own beauty? The puddle mirror whispered: Yes!

May we all walk in beauty and in our beauty on this earth!